Madrid, 15 June 2021– The EU’s massive commitment to spend €672.5 billion on the recovery from the pandemic is at risk of corruption and misuse due to a serious lack of transparency and accountability mechanisms, according to an analysis by civil society organisations from across Europe.

The analysis released today by the newly-formed Open Procurement EU Coalition looks at 22 EU Member States’ plans for spending the Recovery and Resilience Facility, and found that 20 countries are not planning to release information about the recipients of the funds.

Seven countries did not commit to any transparency in the spending of the funds: Austria, Croatia, Denmark, Germany, Poland, Slovakia, Slovenia. Furthermore, not one of the 22 RRF national plans commits to publishing information on spending in an open data format.

France scored just two out of six (2 out of 6) points in the analysis carried out by the Access Info Europe team working with Open Procurement EU Coalition partners. This is despite President Emmanuel Macron promising at the OGP Virtual Leaders’ Summit on 24 September 2020 that “all stimulus packages should be available as open data.” 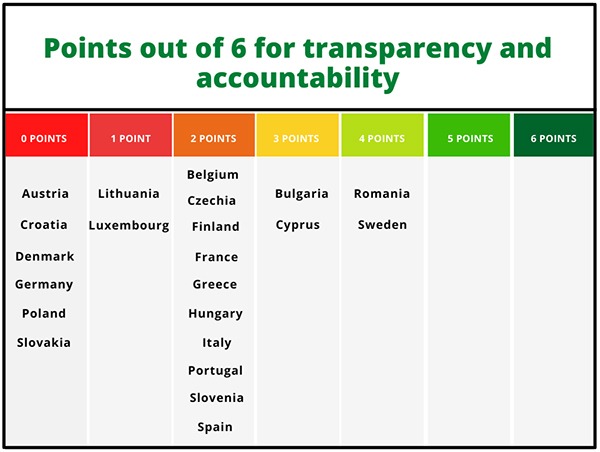 “The stunning lack of transparency commitments totally undermines the important oversight role of civil society and investigative journalists to ensure there is no corruption or abuse in the use of these funds,” said Nicholas Aiossa of Transparency International EU.

The analysis of the national Recovery and Resilience Plans also found that while two thirds (68%) make some mention of proactive publication of information, these are vague commitments to publishing more general information.

“Without precise and detailed information about how the funds are used, we will not be able to assess if the spending is contributing to advancing the European Green Deal, despite the European Commission claiming that combating climate change is ‘the lifeline out of the pandemic’,” said Helen Darbishire, of Access Info, which worked on the evaluation of the national plans.

“Transparency and open data are key as the pandemic has laid bare how opaque and paper-based systems can be abused,” commented Gavin Hayman of the Open Contracting Partnership. “Open procurement will take a central role to ensure the spending turns into the quality public services and infrastructure intended.”

The analysis can be accessed here.