TRANSPARENCY IS THE
NEW STANDARD

For the first time, fifty European Union agencies have made transparent their presidents’ and directors’ travel expenses. The data, which covers all expenses for all missions for the whole of 2016, was released in response to a series of freedom of information requests filed by Access Info Europe.

EU agencies are the decentralised, executive, and independent bodies of the European Union. They are established and created to carry out specific tasks, such as the supervision of the banking sector (European Banking Authority), promotion of gender equality (European Institute for Gender Equality), law enforcement (Europol), or control and surveillance of the EU’s external borders (European Border and Coast Guard Agency, known as Frontex).

Now, the publication of their highest representative’s travel expenses outlines the most comprehensive picture obtained to date on where, how and how often the EU’s top officials travel, and how much does this cost.

This picture is also a positive one: the analysis of the data by Belgian news outlet Knack shows responsible and proportionate spending. The highest spender is Mario Draghi’s European Central Bank (ECB) with four trips of more than € 20 000.

“We welcome the EU agencies’ willingness to make this information available to the public as an important step towards greater accountability,” stated Luisa Izuzquiza, Communications Officer at Access Info Europe.

Prior to submitting these requests, only the European Ombudsman had been publishing this information proactively, while the European External Action Service had committed to do so and have now done so. 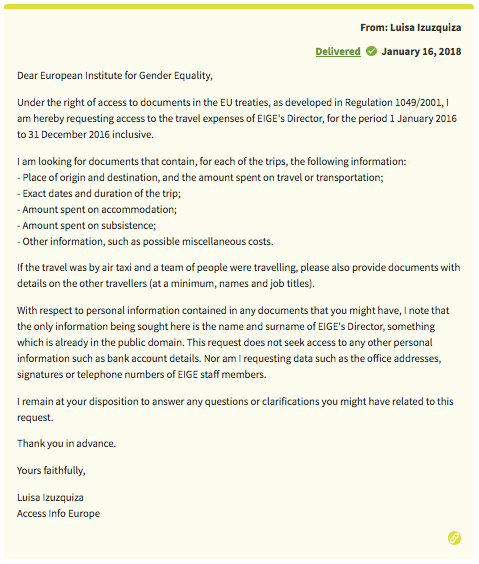 Access Info submitted requests at the end of 2017 to the remaining 52 agencies, of which 48 agencies provided data. Two agencies (Europol and ACER) did not yet respond to the requests, and one agency’s documents are still pending disclosure (ENISA).

Only one agency (Euratom) denied access asserting that the requested data “pertains to the personal information of Commission officials, the disclosure of which would undermine the protection of privacy and integrity of individuals.” Access Info has challenged this full refusal with an administrative appeal (“confirmatory application”). We note that the European Commission in 2016 first applied a privacy exception to travel expense data but later abandoned that line of argument.

The disclosed documents also show great levels of disparity and a lack of uniformity in how this information is being collected and stored at the EU level.

A compilation of travel expenditure for the whole year, broken down per trip and type of expense, and released in a PDF format, was the most common type of disclosure. Other agencies chose to release scanned copies of their mission statements, while only two agencies provided the information in a reusable format.

“The next step now would be for the agencies make this data proactively available to the public,” said Helen Darbishire, Executive Director of Access Info Europe. “This is not only the desirable transparency standard — it’s also an achievable reality, as the European Commission, the EEAS and the EU Ombudsman have demonstrated.”

The agencies’ disclosures now leave the European Parliament at the bottom of the transparency league; transparency of MEP’s travel expenses is still subject to litigation before the General Court of the EU by a team of investigative journalists.

All access to documents requests and all travel expenses for each of the EU agencies’ directors are available here, and per agency below:

EU agencies that didn’t respond to the access to documents request:
European Police Office (Europol)
Agency for the Cooperation of Energy Regulators (ACER)