The European region is a global leader on open data according to the findings of the 2022 Global Data Barometer (GDB) survey of 109 countries. Yet, the 21 European countries still only score an average of 51% out of a maximum of 100 in the GDB scoring system, with significant weaknesses including the fact that government data is not made available as open data, and that key datasets needed to discuss pressing public issues, such as climate change or to combat corruption, are not available in many countries.

The 21 European countries in this study (20 EU Member States plus the UK) have a comparatively better score than other regions of the world, with a 51% average total. This is a poor result after fifteen years of work to open up government data for the public good and given Europe’s recognition of the multiple social, economic, and democratic benefits of digitalisation and open data.

Finding 2: Strong on procurement and health, weak on anti-corruption

Europe scored relatively well on Health and Covid-19 data (61%), a result of work to collect, digitalise and publish data in almost real-time during the pandemic, showing what can be achieved where there is a need accompanied by political will.

Similarly, the scores for Public Finance data (60%) and Public Procurement data (55%) reflect the emphasis that has been placed on democratic benefits of fiscal and spending transparency.

Of concern are the low levels of availability of important datasets, for all of which the EU region scores below 50%, namely Company Information (49%), Political Integrity (38%), and Land data (36%) and the surprisingly poor score of only 44% for data on Climate Action.

With a score of 53% for openness of data, the European region did not perform well. The GDB found that much data is not released according to the highest open data standards, meaning that it is not free of charge, nor openly licensed, nor are entire datasets updated in a timely fashion and made available in a searchable, machine-readable format, for download and reuse.

The more open datasets were Covid-19 Vaccination data (85% of available data is open data), Budget and Spending (76%), Health Vital Statistics (76%) and Emissions (73%). There were very low levels of open data for Land Tenure data (24%) and Lobbying (24%) caused, respectively, by land data only being available against payment, and lobbying data simply not existing in many countries.

The Global Data Barometer study has revealed significant variations across the European region. Overall, Estonia had the highest score, with strong performers including Denmark, Finland, France and the UK.  All the high scores reflected investment in the data ecosystem in these countries over recent years.

Some other countries such as Italy and Spain had strong scores on many indicators, but fell down on others, for instance Spain was strong on data capabilities but weaker on publication of data as fully open data.

For every surveyed country, it is possible to find areas where countries perform better, and areas where improvement is necessary, but consistently at the bottom of the European league table, were Greece, Lithuania and particularly Malta, which scored poorly on the evaluation of data availability in the areas of access to information, climate vulnerability, real-time healthcare system capacity, and lobbying.

The Global Data Barometer evaluation of “Capabilities” inside government found that Europe scored well, with an average of 69% and all 21 European countries scoring over 50%, the only aspect of the GDB research for which this was true: for other elements of the survey some countries scored above 50% and others below it.

European countries have invested well in developing online services (82%) and in digitalisation of government (81%). Quite a few countries have specific, well-funded, open data initiatives (66%) and there has been a reasonable development of digital skills (61%). They are weaker on government support for reuse at only 39%, thereby undermining the potential value of public data for entrepreneurship, participation, accountability, combating fake news, and preventing corruption.

There is a correlation between the capacities in each country and the other scores for the Global Data Barometer modules. The strongest countries on Capabilities were Estonia (92%), Spain (82%), the Netherlands (81%), France (79%), and Finland (79%), all of which have invested significantly in both open data and digitalisation more generally.

The weaker performers in terms of Capabilities were Latvia (59%), Greece (58%), Malta (57%), Croatia (54%) and Romania (53%), countries which also score badly on the actual data availability indicators, particularly Greece and Malta, confirming the finding of a correlation between capacity and outcomes.

A key finding of the GDB is that regulations make a difference and that countries with more regulations requiring collection and/or publication of specific data have significantly more data available. This is true even for countries which did not have strong performance overall, such as Bulgaria (50%) or Croatia (48%), but which do have data available where there are rules requiring it.

Conversely, the absence of rules means little or no data, particularly when there is no EU directive requiring that data be collected and published. Hence there were low scores for most countries on access to information data and on lobbying data, neither of which are regulated by the EU.

The GDB also found that not all countries have yet implemented their obligations under EU directives. For instance, company registration and ownership data is not open, in spite of being a High-Value Dataset in the EU’s Open Data Directive, in part at least because of the lack of an implementing regulation from the European Commission. Furthermore, we found that not all countries had opened their beneficial ownership registers even prior to the 22 November 2022 Court of Justice of the European Union ruling which has subsequently resulted in many countries closing down public access to these registers on grounds of personal data protection.

The GDB’s evaluation of Climate Action data in Europe found that the average score for the European countries was just 44%, so one of the weakest European scores for the various types of data surveyed.

There is more information available on Emissions (61%), and Biodiversity (43%) but very little data on Vulnerabilities to climate change (28%). Whilst on all these datasets there is better availability in Europe than the global averages, that does nothing to justify not providing the public with greater information on these pressing 21st century challenges.

Finding 8: Lack of Data Risks Opening the Door to Corruption

The average score for European countries on the selected anti-corruption indicators is just 42%. Relatively stronger performers on the availability of anti-corruption data are the UK (67%), followed by Estonia (59%), France (56%) and Denmark (55%). The countries with the least data available are Lithuania (30%) and Malta (30%). The overall poor score and the wide disparity puts all of Europe at risk as illegal activity and organised crime shifts to less-well-regulated jurisdictions.

European countries generally score well on the publication of budget and spending data (65%) and on Public Procurement data (63%) reflecting years of work to open up this data, but fall down on datasets essential to ensuring government integrity such as Asset Declarations (39%) and Lobbying data (18%). 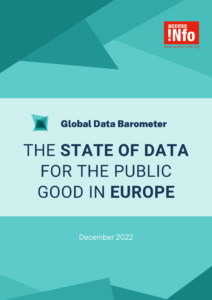 European governments are urged to review results of the Global Data Barometer which will provide a valuable insight into the strengths and weaknesses of each government and provide guidance for a plan of action on how to create genuine open data ecosystems that serve to sustain democratic processes. Specifically, it is recommended that they:

In addition, EU Member States should ensure that they have transposed and implemented all EU directives which require that data be collected and published.

The European Union as a whole should review the levels of publication of key datasets as identified by the GDB with a view to informing its open data strategies and other rules that require Member States to publish data.

The European Commission should take specific action, including:

The European Parliament should:

The Open Government Partnership should engage in and help facilitate European region debates on how to further advance Europe’s digitalisation and opening up of data for the public good. Specifically, it should:

The Organisation for Economic Cooperation and Development (OECD)

Civil society organisations have an important role to play in engaging with national governments, the European Union and the Open Government Partnership to improve the state of data. Specifically:

Access Info can provide more specific information about how civil society can engage in these discussions and processes.

More about the Global Data Barometer

To know more about the results of the Global Data Barometer, which surveyed 109 countries across the globe, you can visit the GDB website.

Another report on the GDB results for the European region is available: Untangling Transparency: Right to Information Data in Europe

All data is also available as open data and can be downloaded and reused from the GDB website.

The Global Data Barometer gathered 107,389 data points in the survey from all 109 countries and cannot guarantee that every value is error-free. Some responses might remain open to question due to different interpretation of guidance across researchers and reviewers, false negatives when sources went undiscovered, or false positives when a source has been interpreted over-generously.