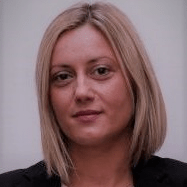 From 2013 to 2018, Anamarija was the Information Commissioner based on the decision of the Croatian Parliament, for a five-year period.